“Matera Universo Pop” exhibition is an itinerary composed of thirty-nine works of the great masters of Pop Art.

Light years away from the peasant society that for millennia lived in the Sassi of Matera, the universe of Popular Art invades the rooms of Fondazione Sassi: from Keith Haring’s puppets hugging, loving and dancing to the “combined-paintings” by Robert Rauschenberg, from the fake typographical halftone screen of Roy Lichtenstein to the genius of Andy Warhol, until the word becoming image in the works of Robert Indiana.

An exhibit to live with a different view, an exhibit that alternates silk-screen printings, tapestries, vinyls, fabrics, strings and terracotta.
Artistic language is unmistakable and it has in the repetition its distinctive sign, finding in the sequence and repetition a common feature with the magic of this ancient town: on one side there are icons and portraits, objects and advertising posters, on the other side there are rooftops, chimneys and the very shapes of houses carved in stone where grey contrasts with really colourful images and objects.

By Graziano Menolascina
In the 20th century we find a certain awakening of the senses with its rebel and innovative creativity, it permanently breaks with the artistic traditions of the old academies at all levels of meaning, shapes and aesthetic function. Because contemporary art, since its very beginning, has always taken inspiration and been influenced by the magic and savage spirit of a certain primitive creativity, main expressions of sign and gesture in their purest form.

One of the first artists to follow this violent instinct was Robert Rauschenberg, who was not by chance given the title of spiritual father of the Pop Art. He was one of the most prolific artists in history, a tenacious researcher. Through his experimental eye he embraced the whole world in one unique combination. In his compositions he introduces material elements, objects, even stuffed animals, by putting them together in a fusion of those ones and painting that he never abandons. The name the artist gives to his personal union of objects, material and daily things and painting is “combined-paintings”. Rauschenberg adopts the narrative way, the telling of stories that are about people, places or objects. Telling stories has always consequences in the ones telling them, due to the pleasure, or the necessity, of letting people know about their stories, and in the ones listening to them, for the pleasure of listening or seeing, for the pleasure or the necessity of knowledge, for the pleasure of being able to re-tell the stories learned. The works are always provocative in the sense that they evoke, without censorships, stories and events that change as time goes by. A reportage through the objects that are exhibited, every single object has a story, a set of images that tell a story making it visible.

Rauschenberg creates a connection between art and life which has an absolute stylistic independence, far from every other artistic trend, continuously experimenting new techniques and new materials, launching and opening the doors to an intercontinental journey through landscapes, atmospheres, random souls, an alchemical without restrictions, in order to finally get to a new era, Pop Art.
One of the other preeminent figures of American art since the 1960s is Robert Indiana. He had a central role in the development of the assemblage art, hard-edge painting and pop art. A self proclaimed “American painter of sings”, Indiana has created a very original body work that explores American identity, personal history, and the power of abstraction and language, leaving an important legacy that resonates in the work of many contemporary artists that make the written word a central element of their work. Although acknowledged as a leader of Pop, Indiana distinguished himself from his Pop peers by addressing important social and political issues and incorporating profound historical and literary references into his works. 1966 marked a turning point in Indiana’s career with the success of his LOVE image, which had been featured in a solo exhibition at the Stable Gallery.  The word love, a central theme in Indiana’s work. Name of one of the most important artistic trends of the post war period. Born in England around the 1950s, Pop Art will find its full glory in New York starting from the 1960s. Its name comes from “popular art” – not as in the art of the people or for the people but, more precisely, as in mass art, meaning produced in a series. And since mass doesn’t have a face, the art that expresses it should be as anonymous as possible: that’s the only way it can be accepted and understood by the majority of people.

In a world dominated by consumption, Pop Art rejects the expression of interiority and instinctiveness and looks instead at the external world, at the entirety of visual prods that surround the contemporary man: the so-called “urban folklore”. It is indeed a kind of art which is open to the most popular forms of communication: comics, advertising, paintings produced in series. The fact of wanting to put on canvas or in sculpture common objects lifting them up as artistic display can ideally be connected to the Swiss Dada movement, even if completely deprived of its anarchic, provocative and disapproving charge. With different nuances, artists resumed the images of mass communication means, of cinema and entertaining world, of advertising. Pop Art uses the same language as advertising and therefore turns out to be perfectly consistent to the society of consumption that produced it. As a consequence, the artist doesn’t find any more room for a subjective experience, and this makes him a pure manipulator of images, objects and symbols that were already fabricated for an industrial, advertising or economical purpose. These objects, reproduced through sculpture and painting, are completely personalized. To sum up, we can say that Pop Art has documented popular American culture, by turning the most known or symbolic images of mass media into icons.
Another important leading figure is Roy Lichtenstein. More nostalgic, but thanks to his refined sense of composition he can bring back in his works the childhood of a far-away universe, as well as its heroes, war aviators and crying romantic young ladies. With a lightness of precision, he throws the audience in the world of objects of daily use, in a context of economic opulence and generalised well-being. Cheerful images, clearly descriptive, ironic, joyfully colourful, far from existential anguishes of a lot of previous movements, expressive in a new world which is light-heartedly consumerist and enthusiastically modern. The artist acts on an original image not by copying it, but re-elaborating it according to his own aesthetic and artistic criteria. These criteria recall, among others, the use of points by Benday, the use of Plexiglass or Rowlux, with which you can create landscapes of different sort. The true genius of Lichtenstein was in the fake typographical halftone screen that gave the impression that every image was the photographic enlargement of a printed image from a reproduction.

The most eclectic of the group, the Pop Star par excellence: Andy Warhol. First of all he was an excellent communicator, one that better than any other artist knew how to interpret the revolutionary changes happening in the wellness society of consumption of the 1960s; he understood the powerful mechanisms of advertising and used them to set up his whole philosophy, his artistic poetry, but most of all his own life, at the point that it was considered a work of art itself. Painter, photographer, film-maker, producer for cinema, music and theatre, writer (philosopher and sociologist) and publisher. He fit perfectly in all of these roles conducting, with a very personal vision of the aesthetic and creative representation, the use of bright and conflicting colours, the celebration of representative idols in a pattern that can be summarised in the basic concepts of beauty-power-fashion, consumerism, repetitiveness; in conclusion Andy Warhol’s art is the representation of an age, through its key-images. Andy Warhol, with his personality and his figure, reflected the desires of the American consumerist culture and his work is nothing but an extension of all this. His silk-screen printings in series of known people such as Marilyn Monroe or Mao Tse-tung, of consumer goods like Coca Cola or Brillo become a display of an obsessive attention to the image, the appearance and above all they insolently defy the traditional world of art. His art brought supermarket shelves in museums or exhibitions, it was a provocation, and not even a subtle one. He often reiterated how consumer goods represent social democracy and they have to be recognised as such: even the poorest of people can drink the very same Coca Cola that Jimmy Carter or Liz Taylor drink. Art should be “consumed” like any other good. The obscene subjects of all the scenes captured in Warhol’s works were probably the secret to his success, making him a very scandalous character and a fashionable one at the same time. The young painter soon reveals himself as a true artist, son of the culture of comics, but also the culture of Mayas, Japanese pictograms and Picasso, a lot more than a graffiti artist or a good and creative decorator.
The young Keith Haring develops his own philosophy of art, too, the “Popular Art”, that has to be for everyone. That is the reason why he draws with white chalk on black paper which is glued on old advertising posters in New York metro stations (1981), which become his atelier and his permanent exhibition. That’s how he starts a hectic activity, painting on everything: plastic, metal, waste, low-value statues. Introducing himself as curator of exhibitions of drawings and graffiti at the Mudd Club, he hosts a solo exhibit at Club 57 and does murals in the courtyard of the Lower East Side school. The artist paints in the underground until 1986 and a lot of people become aware of him, the typical Haring puppets, the stylised figured hugging, loving and dancing hit by sun rays irradiating and thus creating the movement that creates other movement, they are known and loved by the audience. Interested in the multimedia world, the painter records on videocassette the execution of his paintings and he creates an animation of thirty seconds, aired non-stop for a month on the mega-screen in Times Square. In 1983 Keith Haring paints the mural for the Marquette University at Milwaukee, Wisconsin. He takes part to exhibits in Brazil, London, Tokyo and he meets Andy Warhol. His expositions always find favour in the audience, as well as each of his figurative representations, because Haring paints not only on walls or panels, but on anything he happens to run into: shoes, cars, T-shirts and various other objects. 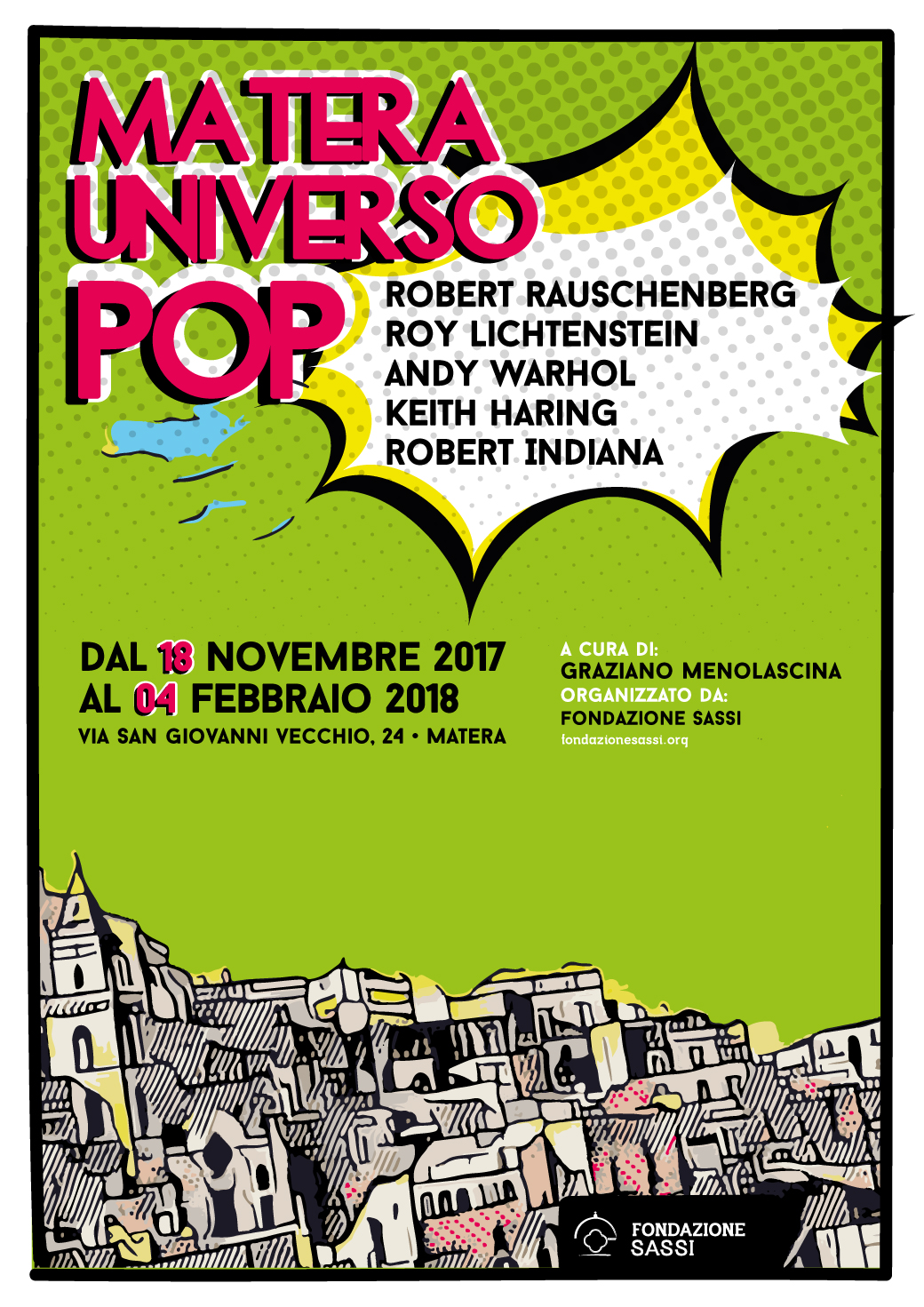