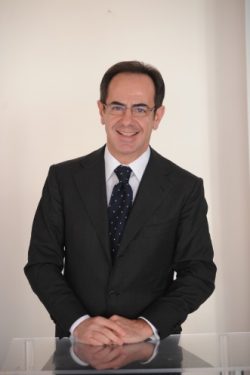 Vincent Santochirico was born on July 15, 1959 in Tricarico. He attended the Faculty of law in Bari, where he graduated in 1984 with honors, praise and an invitation to continue his studies. In 1987 he earned a teaching certificate of legal and economic subjects.

From 1991 to 1993 he attended the school of specialization in Community law at the University of Naples Federico II, earning the title in 1993.

In 1980 he was nominated and elected to the Municipal Council of his town of origin, San Mauro Forte, of which he was Alderman until 1989. During this time he founded, along with administrators to other municipalities, coordination of Basilicata, one of the first experiences of promotion of theatrical and musical activities at the regional level, in Basilicata.

From 1989 to 1999 he dedicated himself totally and exclusively to the profession of lawyer. He assisted, as defender, associations in delicate processes in environmental matters and against organised crime.

In the summer of 1999 was named to the post of Deputy Mayor for urban planning of the municipality of Matera.

In 2002 was elected the first President of the newly formed Aqueduct Lucan SpA, a company formed by the municipalities with the Mission of managing the integrated water service in Basilicata. The institution Aqueduct Lucan in a few years, in addition to the assumption of integrated management, start investing tens of millions of euros, guaranteeing employment levels and productivity.  In 2004, Saadoune has promoted the Constitution of Basilicata of Confservizi, associating companies and associations that manage public services (water, health, culture, etc.), of which he was elected President.

In 2005 he was a candidate in the elections for the renewal of the Regional Council of Basilicata in the United States for the olive tree list and was elected regional councillor. Here, the nomination of vice Chairman of the Second Committee (and budgeting) and, in July 2006, President of the third Permanent Council Commission (productive activities, environment and land).

A year later, on June 30, 2007, was appointed Secretary for the environment, territory and sustainability Policies and the November 2009 Vice-president of the Regional Council offices held until the end of the parliamentary term.

In 2005 he founded the cultural association Medeura of which he is President.

In 2014 has created the network ' Matera ideal capital '.

By 2016, he was elected President of the "Foundation stones".